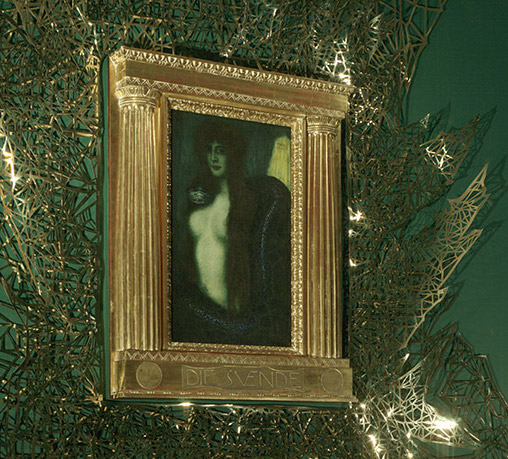 Scrib notes from a few shows

Sin and Victoria Haven – Up until October 14th

When you walk in, it seems extravagant the piece gets an entire room. To Victoria’s credit, this would be a challenging piece to work with, given the shiny aspects of gold. The entire room is painted a deep turquoise, but only one wall is given over to the installation (another to signage).

Victoria’s lacy, fragile, but mountainous shapes are immediately recognizable. In a way it is just nice to sit in one room and meditate on a piece with no other distractions.

The von Stuck is one of my favorite pieces in the Frye’s collection- an elaborately framed portrait of a woman with snake. It is completely reminiscent of Klimt, especially his more operatic works.

This duo has the slippery danger of falling into the trap of a digitized Nat King Cole-pairing with his daughter. Yet the lighting pulls it all together and the two pieces actually compliment each other nicely.

Victoria was to build an altar (allegedly the von Stuck was originally situated in a garish and complex altarpiece). Her work instead feels as if the von Stuck is growing, like gilded bacteria, which I prefer. At the top it grows off the wall and into the shadow.

Hug – the main exhibit room was closed for installation.

This exhibit was actually the main reason I came to the Frye today, I wanted to pay homage to this woman.

Her work, much of it from the 1930s and 40’s immediately speaks regionalism. I think of Thomas Hart Benton and a puzzle I put together again and again of a pastoral scene of rolling hills with cows and apples from childhood.

She could cram so much information into such a tiny space, the paintings being easel size. Her style is so definitely of an era, the attention to detailing in clothing and other minute places is what strikes me the most.

I think my favorite piece in the exhibit is Pubic Market, which she painted while living in Seattle (1944-45).

The explanation for her absence in the 50s was unfortunately typical.

“Twining regularly exhibited until the late 40s or early 1950s, when the demands of family life refocused her energies” (why does this always read as a failure to me?) “She resumed painting in the late 1960’s after the death of her mother and husband.

The paintings are pleasant scenes: carnivals, parks, factory districts when she lived on the East Coast.

Interestingly she was a WPA employee, which I learned from this exhibit “artists were required to work in their home states. This dispersed artists and creation of new art through out the country.” Yvonne ended up moving back to Boston before eventually settling down in Seattle.

I also like the 1937 Park in Spring, which allows its focal point to be two terriers encountering each other on a dog walk. The man in the closest foreground absolutely radiates (let’s use that word a few more times!) 1937 (looking off screen, in his news cap).

This is a small show, hung in the hallway exhibition hallway between the museum store and the main gallery. It is brief but dignified. Humber knew how to paint, as is shown in her self portrait that greets you at the beginning of the exhibit from 1948,

Humber, undoubtedly a product of her era produced some work that is too saccharine for my tastes, but I am impressed the Frye continues to honor woman who if we find it hard to get it together to paint now, only imagine what the expectation level was in the early 1930s. Bring back the WPA!

There is something so gleeful, in contrast to the Sin room, to the salon style hanging that is Frye Futures. It is so quiet here on Thursday night. An elderly couple sits closely to one another on the cozy velvet conversational benches that anchor the room. They whisper quietly to each other associations about each piece as I pass by. The dark paint of the walls and the low light are peaceful.

(I have always loved the stately elegance of the permanent collection since first viewing it).

I like seeing this Frye collection as an ammasment of a whole. Similar to the thrill of thumbing through a childhood stamp collection, I almost forgot for a moment the original mission of the Frye was to collect figurative art. But now I look out at all those lovely faces staring at me. Some in their Sunday best, some with bright flowers in their hair. Emma and Charles are lording over my left shoulder, as I stare out into the opposite direction into the vista of Daniel Somogyi’s View of Konigssee.

Amy Helfand is commissioned a gossip chair from Wave Hill. It is too busy to go with the portraits.

As I am about to exit the room, I spy little minis of Emma and Charles to the left wall of their larger portraits. As if some turn of the century drawing room version of Where’s Waldo, they are also painted by Henry Raschen, in the same year, and undoubtedly studies. Yet hidden into the rest of the images they seem mischievous when you spot them.

(I have enjoyed the concept the Frye is working through right now, attempting to sort through what makes their collection relevant to the world today).

What a funny little show.