Ben can’t seem to get over how corny it is here. I had kind of forgotten it is pretty ingrained in the culture starting with people selling clam chowder who tell you to “keep clam” to the fleet of pink tow trucks that run all over the city.

B: “You mean a stupid car in the shape of a toe painted pink is going around towing cars? And there is more than one of them?”

What I can’t get over is all the signage hanging around town left over from the sixties and early 70’s. I mean take Aurora Avenue for instance, that is a kitsch dream come true. All those scuzzy motels (The Marco Polo, The Black Angus, etc)smooched in next to the pawn and gun shops. It is strange while Seattle isn’t really steeped in ancient history, it has nicely preserved the stuff that is really appealing to me after all this time away. I noticed a similar thing about San Francisco last fall during that visit. There is some mighty fine 70’s landscape architecture here too, like bad Frank Lloyd Wright knockoffs. Sure plenty of the bad stuff (I call it Current Generic)too since this city is rolling right out of a building boom, but that bland stuff doesn’t even register in this bean. I was thinking of that book Venturi and Scott put out maybe in the late 70’s about the architecture of Las Vegas, which is kind of sad because a lot of that stuff (built in the same era as Aurora Avenue undoubtedly)is gone now. Someone should document the late century crap here before they decide to rip it all down.

CATCH OF THE DAY: 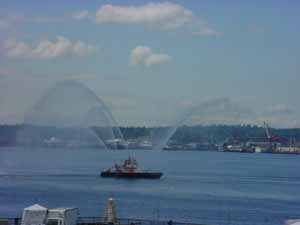