There is some art to be seen this year at the annual local Labor Day brouhaha that is termed Bumbershoot.

A big deal show that has been moving in installments across the country. Seeing swarms of kids react to the photography was interesting, an argument for the informal venue. A representation of most well known photographers can be found in this tribute to 50 years of Aperture : Cartier-Bresson, Welty, Arbus, Model, Plachy, Weston, Meatyard, just to name a few. Mark Klett who has made a career of photographing the West, amused me with his tribute to Thomas Moran at Yellowstone (it’s exactly what you think when you’re there):

(editor: most of the photos have been lost to the digital ages)

And his other contribution to the exhibit: “Rebecca Making Coq Au Vin Near the Site of Smithson’s Spiral Jetty, Salt Lake UT” is equally satisfying: 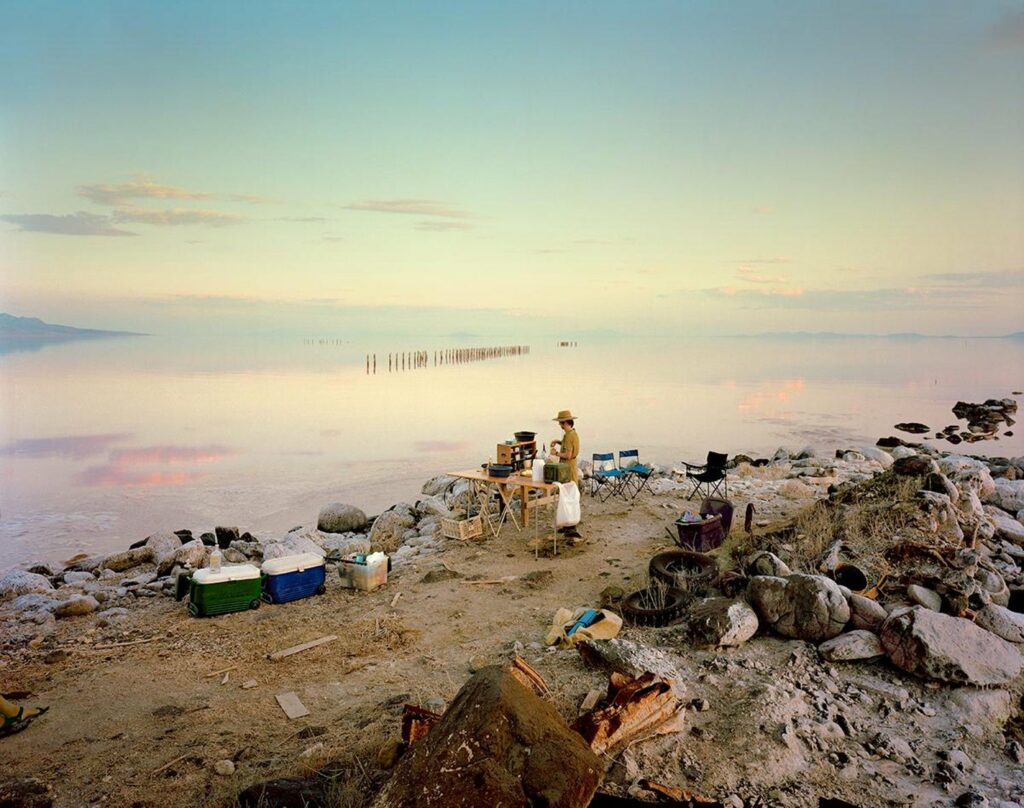 Matthew Kangas, who files all of the Art In America reports from this region curated the visual art roundup titled Consumables. This is his 11th Bumbershoot offering. Good range of stuff from the local compadres and some famous additions from Lichtenstein and the likes of Claus Oldenberg and his huge ceramic pie, keeping the consumption theme in tact. Our lovely Yvette has a painting in the show as well as Portland painter Michael Brophy who I have raved about before. More of him in a minute. There was also a Vancouver B.C. painter whose name I neglected to note who has a damn fine painting of a car in the exhibit, and no it’s not the same car painting noted in the Seattle Times. I asked if I could take photos and was denied, which miffed me.

More Michael Brophy. Clear Cut Press, is an Oregon small press responsible for some wonderful publications that are beautifully printed , focusing on NW artists and writers . They basically kick ass. Last year they published a book on Brophy and have picked up some great writers like Charles D’Ambrosio. I asked if they had yet published any [as promised] Wes Wehr and we found he has a selection in their new compilation: The Clear Cut Future – a small but potent chapbook [which I couldn’t resist]. Later while doing a preliminary leaf through I was surprised to find a suite of gouache paintings by Brophy amongst other drawing and photographic inclusions. Art for your pocket.