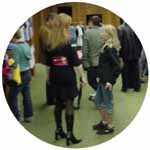 Last weekend was a great art viewing week- I just haven’t had time to digest it. Friday I went to two of my favorite venues in Seattle –Western Bridge and the Frye, never regrettful visits. Hopefully more to come about that- I think Crash. Pause. Rewind. has to be the best show up for the season here.

Saturday evening, I dragged a sibling to the Thread Shop My-T event. WTF? It was a great and a complete departure from most, well I was going to say art events, but really a great departure from what you would do anywhere on a Saturday night. Held across the street from Thread Shop’s actual store, in a kind of rec-room venue- people milled about picking out art patches while music played, people swigged beer and sewing machine’s whirred in the back ground. It was great fun. As predicted, I went for the Polly Apfelbaum patch (I learned based on some political posters she had made last election) and my sister went for a couple, including the Maki Tamura. Later I felt a little regrettful in not choosing the Jack Daws, but we’ll live.
It was a crazy rainy night and a strangely inviting way to spend the evening.