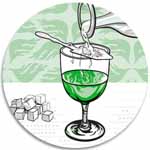 I was talking the other night with two friends who had lived outside of Prague a few years ago, doing an artist residency that found them rambling about and working inside a huge castle. My interest in the topic, besides reminiscing about travel adventures is that I’ve found virtually no information out there on the day-to-day logistics for this kind of lifestyle. How does one get 50 yards of canvas and tubes of paint half way across the world? Not in your suitcase anymore, that is for certain with airline weight limitations. Maybe there doesn’t need to be information in such pat form (Residencies for Dummies?), but I just find it hard to believe that no one has meditated on this subject as topic at all. You can see from sites like a Res Artis that at this very moment if you stopped the clock, a veritable condensed bee-hive of artist activity is going on across the globe—people living in strange situations and placing them outside of their normal lives in order to be given the opportunity to focus on what they have to.

I live with someone who spent an entire year on this residency circuit. He found himself driving from Sculpture Space in Utica NY, to Villa Montalvo in California, to Bemis in Omaha, Nebraska, back to California to Djerassi and finally, when the money ran out he had to cancel a spot at Yaddo and get on with his real life. There was no shampoo, rinse, repeat in this story as the real life continued to intervene and the residencies are now a far, although nice memory. I visited him at Sculpture Space and even lived at Bemis for two weeks, so I caught a tiny glimpse of what a great opportunity it is to just have a place that allows you to make your work. Some residencies are full on glamorous and some bare-bones simple but the main thing is they are supposed to offer a distraction-free place for concentration.

My footnote to the conversation was asking if they had helped themselves to the absinthe while traveling around the Czechoslovakian landscape, and unfortunately the opportunity had not presented its self. Prague is allegedly famous for its wide availability of the substance with reports of people losing their minds in its sooty streets. I have never visited Prague so I can’t report back. However, just once in Barcelona I experienced for myself what results the green menace can have on one’s mind, accompanied by the punishing symphonic side effects you experience the next day. Lured by this article from Salon back in its salad days (so young, better designed and full of travel stories), I convinced my partner to make a treasure hunt of an evening one night in efforts to locate the promising Bar Marsella. 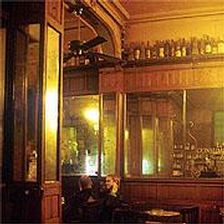 Yes, we found it and seeing this photo of the place only brings back a vague memory of one refreshment whose reputation remains intact as far as I am concerned.

This week, Wired put on-line this story (from their latest print issue) about Ted Breaux, an American environmental microbiologist who become obsessed with cracking the chemical secrets behind absinthe, a drink that remains technically illegal to sell in the United States. He claims absinthe poses no more harm to us than any other elixir.

Breaux went public with his findings, but not in a peer-reviewed scholarly journal. “Here I am with just a bachelor’s in microbiology. I knew I could be tarred and feathered.” Instead, he posted his test results in the discussion threads at La Fee Verte, an online gathering place for absinthe geeks. Flame wars erupted, and Breaux cited his research to buttress his point about thujone concentrations. The site’s moderator eventually dubbed him “elite absinthe enforcer”. 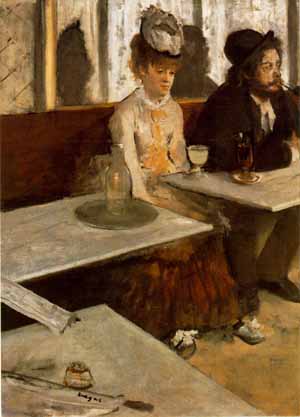 In a similar vein, last summer I found myself amused by a story in literary journal Tin House by Elissa Schappell called: The Green Fairy. In the tale, Schappell recounts a segment of time that captures Schappell with her husband setting up life in a small Portuguese fishing village to write. While there, they willfully seek to partake in the inspiration Rimbaud and others recommended by finding themselves at the bottom of an absinthe glass.

Absinthe was the liquor of choice among Bohemians, artists, and writers during the late nineteenth and early twentieth centuries. The Green Fairy played muse to such painters as Picasso and Manet, inspiring them to paint portraits of absinthe drinkers (Degas’s drinker is a particularly marvelous study in degradation), but more importantly, it literally influenced their vision, mixing dream state and reality.

Some art historians attribute the birth of Cubism to Picasso and Braque painting under the influence. Van Gogh’s work at Arles appears strongly affected by vision warped by regular infusions of absinthe. (One hopes the pain of severing his ear to make a gift to a prostitute was somewhat diminished by the narcotizing effects of absinthe.) Toulouse-Latrec carried a toot of the stuff in his hollow walking staff. His fondness for La Fée Verte (he painted posters glorifying her powers) rivaled his lust for cancan dancers.

Her story continues on through horrid hangovers that did not however keep the two of them away every night from returning and becoming obsessed with the local white absinthe: “Drinking white absinthe was wonderful. I cannot compare it to anything I have had since, although I imagine distilled opium might come close”. Two months pass and strangely she starts seeing rings of light during the day, and sinks into an immobile deep depression— finally concluding on the note of a nervous breakdown. However, a final passage states she would not pass up one last glass if put in front of a firing squad.
The piece ends generously with Hemingway’s own recipe for his favored “Death in the Afternoon” (iced champagne and absinthe).

Veuve Cliquot, or whatever champagne you fancy
Absinthe

Hemingway gave the directions as thus:
“Pour one jigger absinthe into a champagne glass. Add iced champagne until it attains the proper opalescent milkiness. Drink three to five of these slowly”.