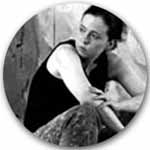 You don’t see many of these!

Goodbye to Derrida. It was thanks to Vroom Journal’s entry on the death of Jacques Derrida that informed me that the French deconstructionist had passed away this weekend. Years ago, a painting professor I took courses with had glommed onto the Deconstruction theories so hard, I have forever since footnoted it in my mind as “the D word”. These ideas about painting and “D” eventually saw there way into print– in books such as Changing Images of Pictorial Space: A History of Spatial Illusion in Painting. I was never a big proponent of Deconstruction, but the paintings I am working on right now are related to this said professor, so it has been strangely on my mind lately.

Be sure to give a moment to the new Artdish article on Elizabeth Brown’s curation of the new show opening in November at the Henry Art Gallery. More on the slide vs. digital debate from this mornings PI pickup from the NYT (link deceased):

As anyone who has taken art history knows, slides are central to the instruction. But assembling 50 or 100 slides for a single class can take hours. What’s more, slides are a waning technology. For example, the Eastman Kodak Co. stopped making slide projectors in June. And while other companies still make projectors, many colleges have begun inching toward digitization.

[Run to your local Salvation Army now to save those archaic objects of days gone by- slide projectors.]

The feature goes on to entail how ARTstor has stepped up to the plate (or digital projector) by creating an online library of digital art. Still lacking in its collection are modern art due to negotiations with folks representing contemporary artists.

This fact though I could not confirm myself. When I went to search their archives a message was fed back to me stating,”Your IP address indicates that you are not coming from an authorized institution that has a subscription arrangement with ARTstor. ” True, I don’t even consider myself an unauthorized institution, so I will have to take their word on it. A world with out upside down slide presentation glitches will be a strange world indeed.

This topic reminds me of one of my most formative art school memories. During my first year as an art student I had the opportunity to travel with a bunch of my fellow students to the Portland Art Museum, to see a Magdalena Abakanowicz retrospective. The exhibit its self was stunning and it’s importance has remained imprinted on my memory.

That day as well, Magdalena was a the museum to lecture about her work. She commanded a strong dignified presence at the front of the room, wearing all black and speaking seriously of her work and her life. This was the first time I had seen a “real” artist and I was awestruck.

Clicking through slide by slide, she recounted her days in Poland and the progression of her work from her large fiber Abakans to the burlap cast installations such as Backs which we had all just seen looming throughout the exhibit.

Suddenly half way through the lecture the entire screen in front of our eyes turned blue and black, the image of melted film being projected in front of us. “What is going on here!??” she yelled out horrified, realizing her slides were suddenly turning to blobs of plastic as they burned in the projector. This moment is frozen in my memory of as hanging there for hours until somebody took command of the situation, as we all sat there dumbfounded. Of course the situation was rectified and the lecture continued, with no further drama. However this slide projector snafu has remained large in my mind, as has the image of her standing at the podium that day watching with alarm as her projected body of work disintegrated before our eyes. A summer top ten: this is hard ,like asking what your favorite color is- chartreuse? Red, no blue.

Off the top of my head:

1. Susan Rothenberg– lovely paint- I’ll defend her to the death.

4. Diebenkorn– in my blood & my brain. the reason I started writing about art.

7. Goya – his chapel in Madrid was my religious experience, enough said.

10.Gustave Klimt – his landscapes kill me.

And all the young kids: Manteos, Ritchie, Sillman, Heffernan, Richard-Lukucs, Brown , it could go on and on and with no time to spell check.

[mondo art- this is a funny page I just stumbled upon–makes me feel nostalgic for things I don’t even know about. ]