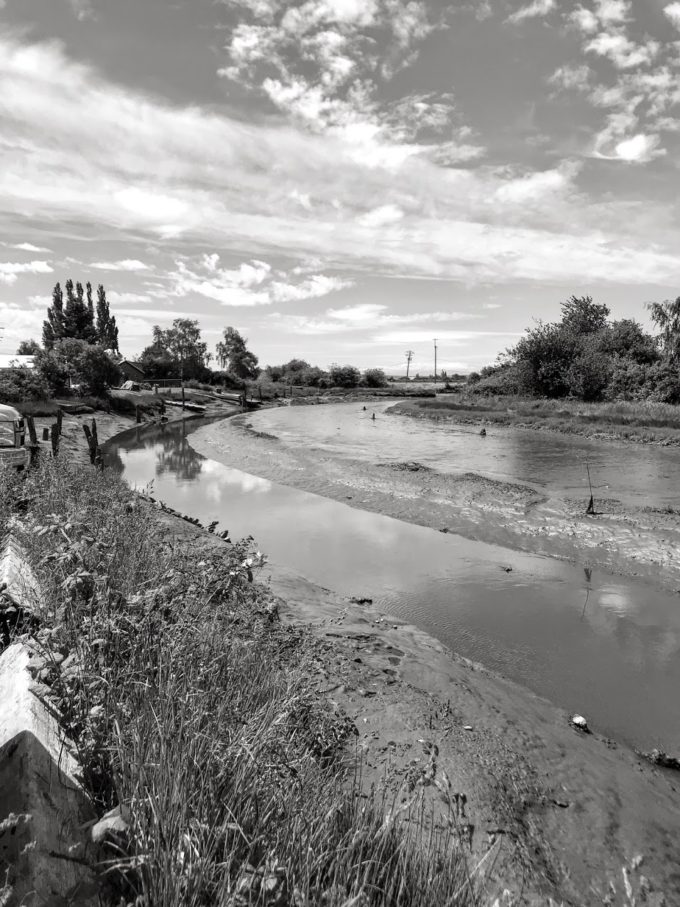 As noted in Charles Pierce LeWarne’s book Utopias in Puget Sound 1885 – 1915, in 1898 the little burg of Edison, WA became the National Headquarters of The Brotherhood of the Co-operative Commonwealth, with the BCC hoping to establish a socialist colony.  It was a short lived but hopeful measure with membership rising to 3,558 in December that year. As with most human pursuits a power struggle and disintegration ensued thus leading to the demise of BCC by year end of 1903.

Never-less the charming destination named for inventor Thomas Edison and boasting 133 inhabitants in the 2010 Census Bureau continued to maintain a sense of charm, welcome and sweetness unparalleled in the area. A sign stating ‘Welcome to Edison, the Kindness Town’ greets you as you ramble towards Edison’s main intersection at 25 miles per hour a good mile after you pass the honor-system dahlia stand (‘Place Payment Here’). 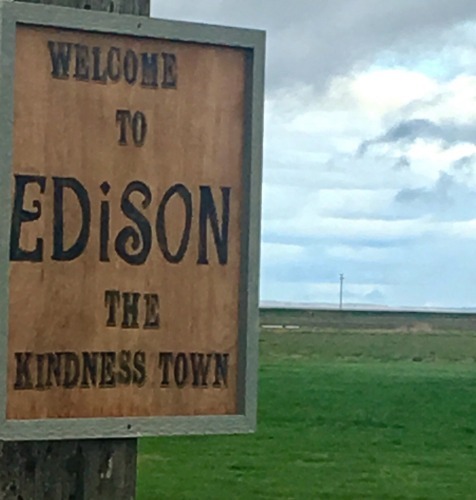 I fell in love with Edison a few years back and claimed it for my own escape, with it’s grand bird-watching slough-sitting and wine consumption opportunities not to mention peace of mind.

I should mention my first visit was in the fall, a fairly different experience than what I now witness of the ant-hillish weekend visitors during the summer. I should feign ignorance that a Food and Wine magazine article last year announced “This Tiny Town in the Pacific Northwest Is About to Be Really Famous for Food ”. I should also fess up to my own contribution of returning again and again, guilty of the same crimes of tourism as a cruise ship guest filing out with the masses to descend on small Alaskan fishing villages all at once. I am part of the equation. 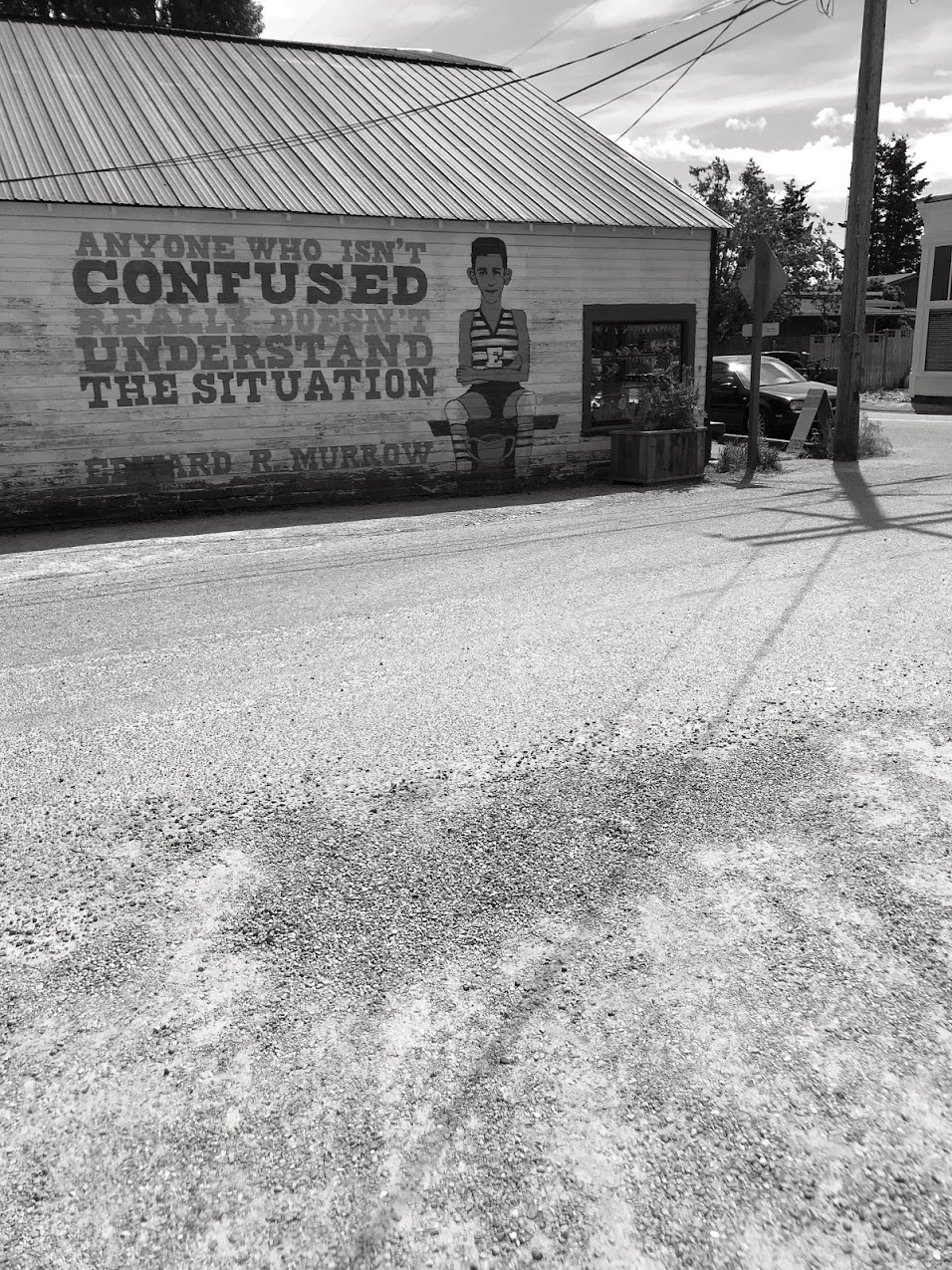 Alas, yesterday quite another nail in the coffin perhaps more than any other threatened to signal the end of this particular utopia.

While picnicking on the rustic tables located between the establishments named Tweets and Mariposa a large shadow suddenly darkened the atmosphere. I turned my head to see the ominous black silhouette of a Rolls Royce SUV*, that which I have never even seen the likes of in Seattle. A chill of opulence passed through the air.

That and the distraction of an unused wad of bills still in my front jeans pocket nagged at me as it comes to pass the formerly cash-only Tweets and Mariposa now take credit cards. This leads me to question how much longer the ghosts of The Brotherhood and subsequent artist colonies will still be around to haunt this little place. 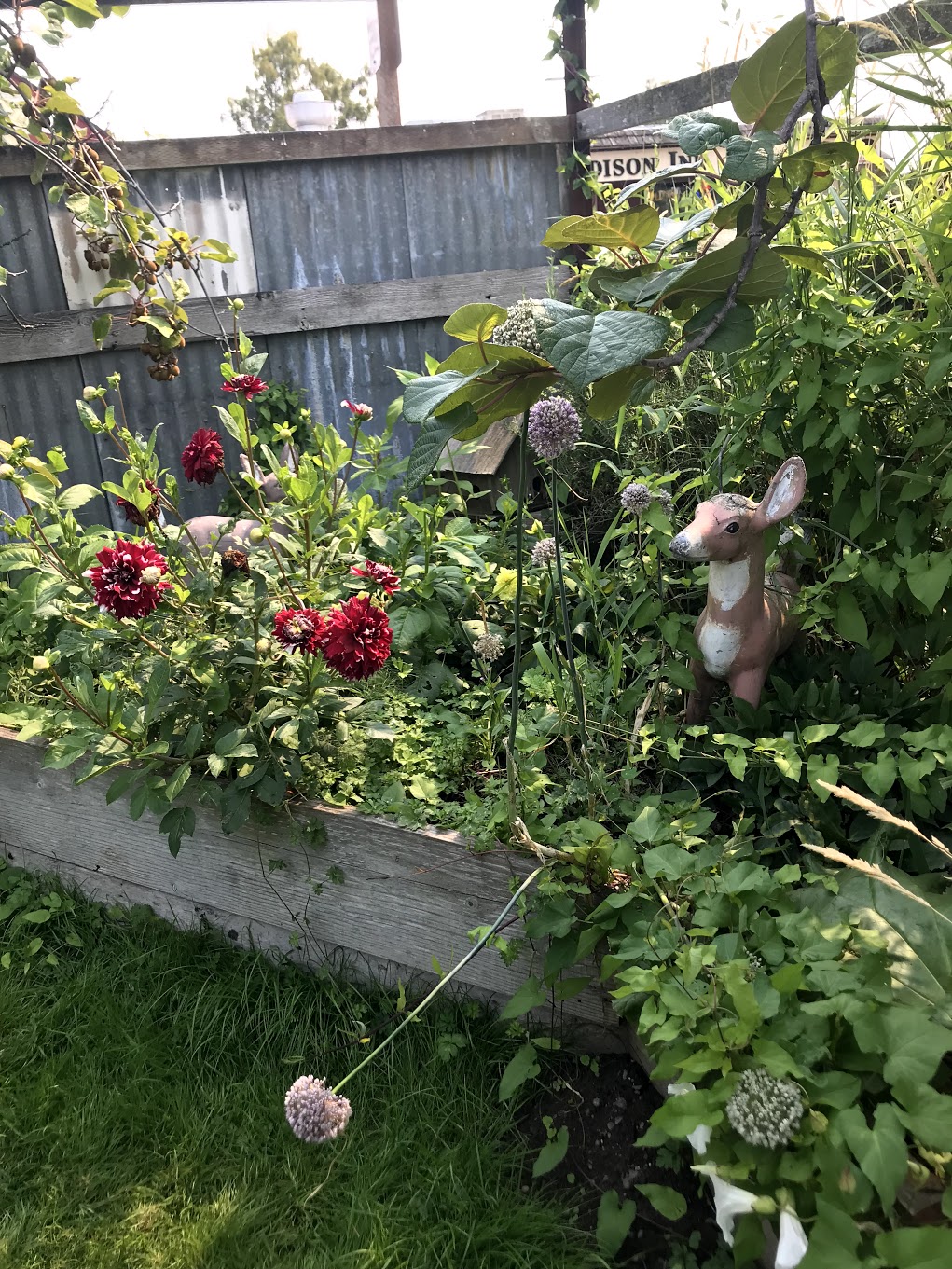 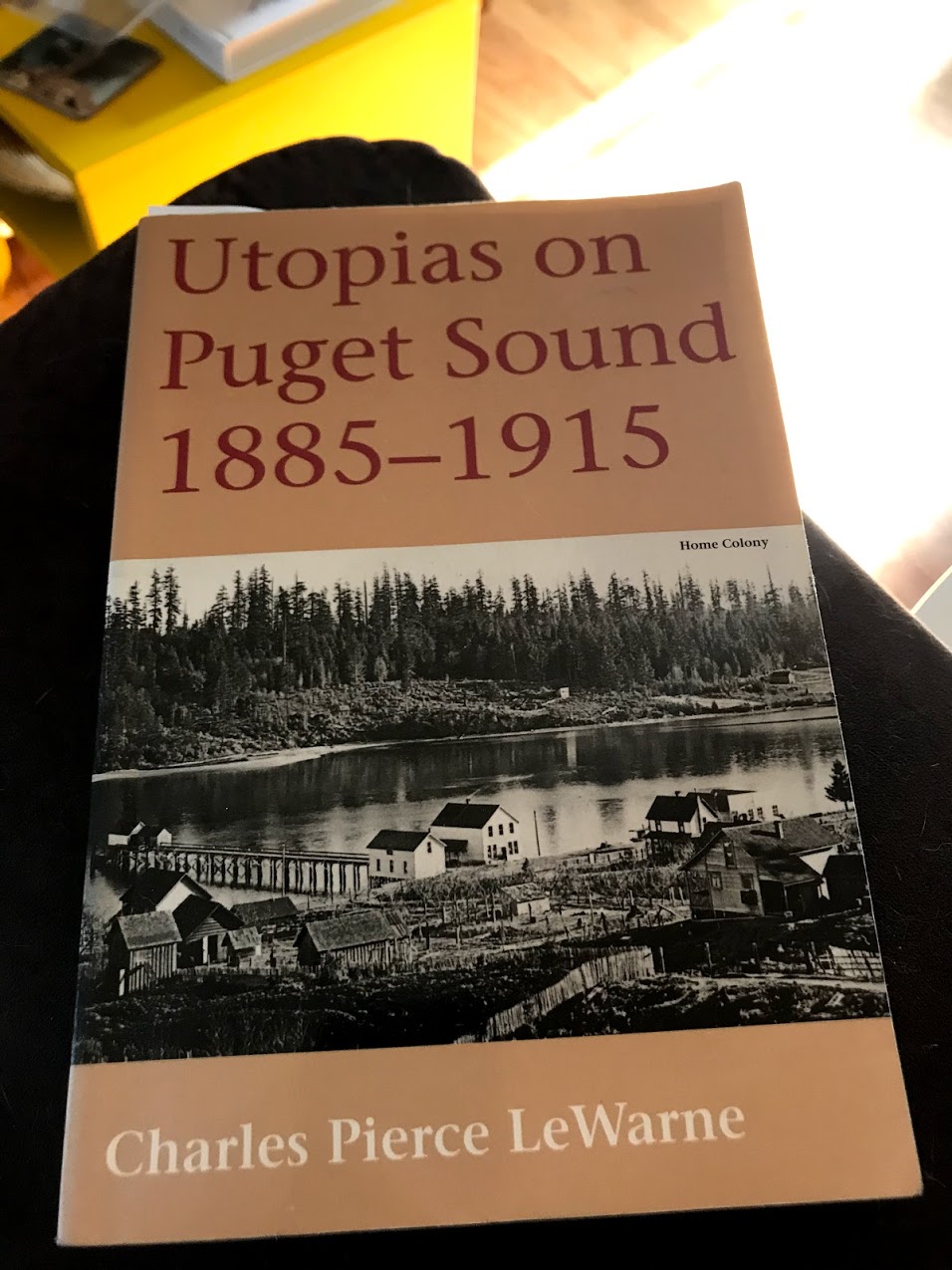 Footnote 1  – From  Utopias in Puget Sound :

People who joined colonies were motivated by a blend of idealism and opportunism. The promises of colony promoters were like beacons to men tired of the economic frustrations of the 1890’s. Although the colonies fell short of fulfilling the material offerings promised, they suggested the opportunity of change to a new and promising life, a brotherhood of well-meaning men working together, and eventual security. Perhaps in each man there is something of the dreamer, the wanderer who would pull up stakes and start life afresh. [p. 230]….Return of general prosperity may have hurt the colonies. The rise of communitarianism in the 1890’s was in part a response to the severe depression. As conditions improved, the appeal of colonies seems to have decreased. [P. 234].

Footnote 2  – From Utopias in Puget Sound :

(I love this passage as in reality Utopia is never really utopia.)

Close living conditions hindered privacy and facilitated quarrels and the spread of disease. A teenage boy was exasperated by fleas…Bitterly one mother wrote, “I, with my son had one room (had there been ten of us we would have had the same) in an apartment that is not [as] well lighted, heated or ventilated as a stable would be.”  [p. 91]. 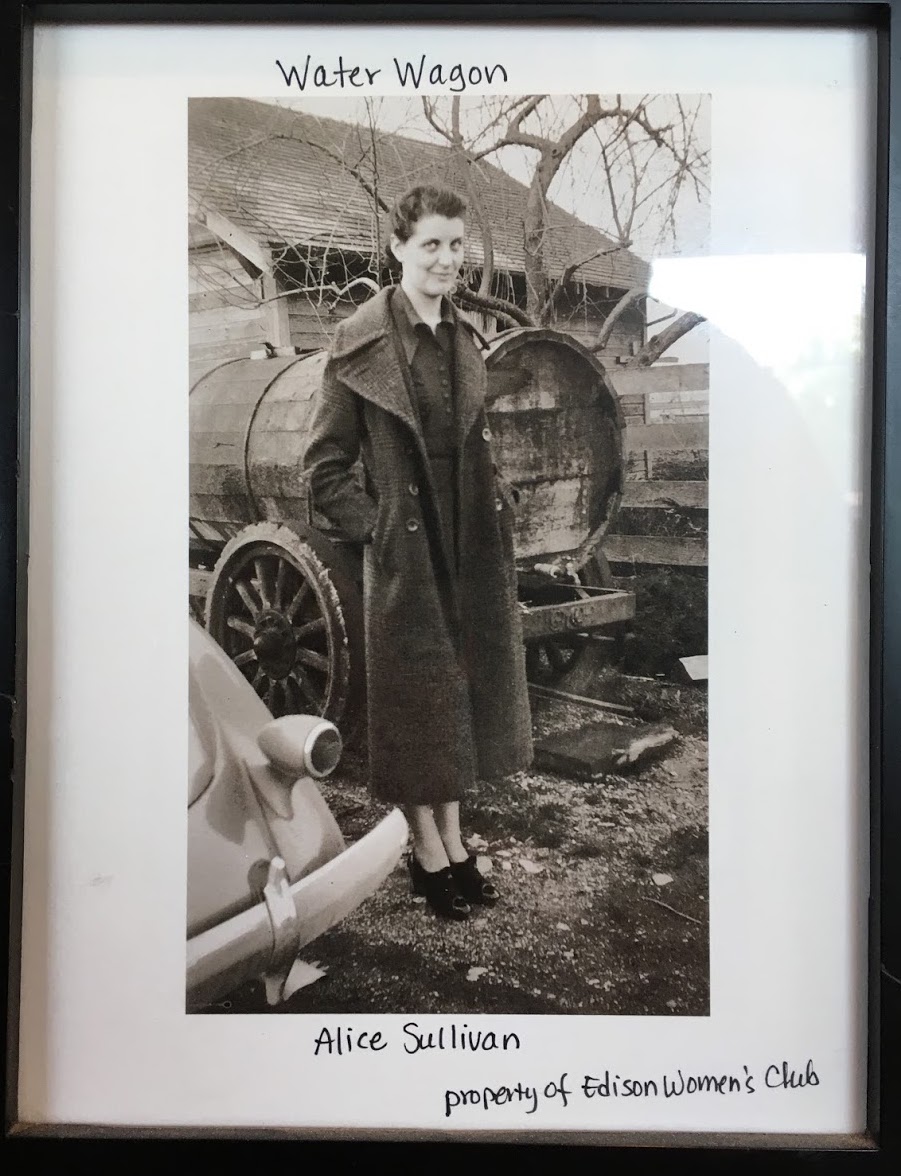 One of the many historical photos in the entryway of The Old Edison.

The first year I frequented Edison I had stars in my eyes about perhaps quitting my current life and moving up there. I started asking around about what kind of work people were able to find to make a living there. The best suggestion, “you could probably get a job at the Bread Farm” (the local bakery). I stacked that information against the local housing listings and descended into a quick reality my dream was not going to happen. 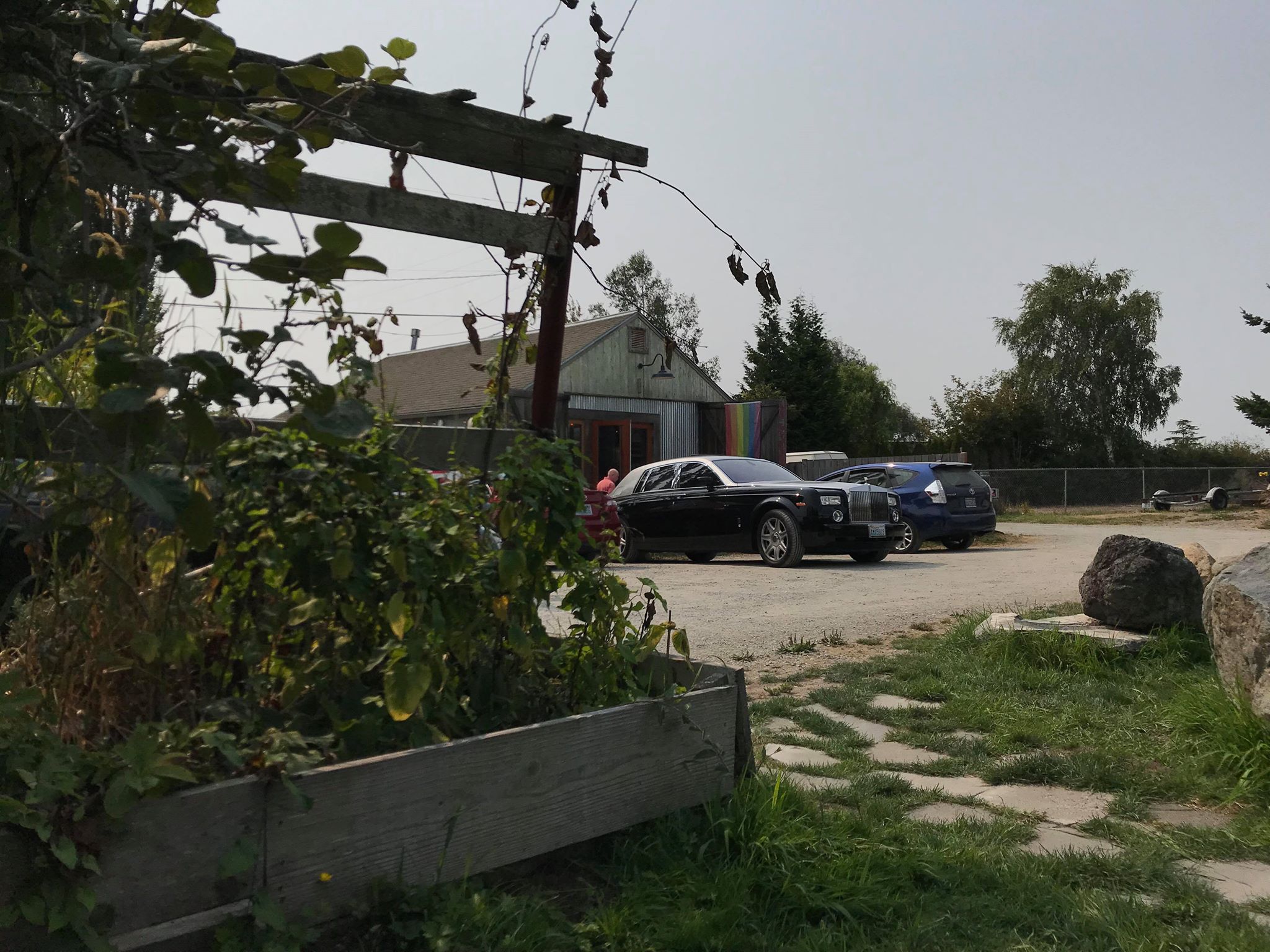 *Regrettably I admit to not being well versed in luxury cars and I inaccurately identified the vehicle, which I am now told is the appropriately named a Rolls Royce Ghost.
Photo credit : Garth Amundson [in exchange for Rolls Royce royalties].