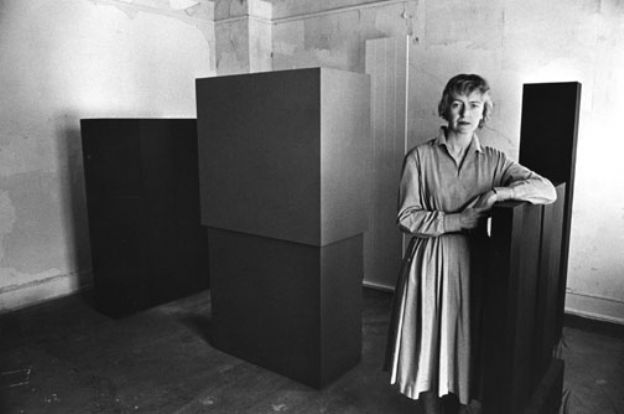 I started reading Anne Truitt’s Daybook again. I feel as if I’ve never set eyes on her writing before. Actually Amazon has packaged her three books into one e-reader, so I am wondering if I started in the wrong place. I know I have read at least two of her books.

Back when I was a young artist, which sounds ridiculously mythical, the Ellensburg City library and the world of literature at large did not offer much documentation on female artists. The only other person that comes to mind is Judy Chicago. It would be really interesting to go back into my own journals to see what is the case (Editor: interesting only to you most likely).

In the book I’m reading currently, Truitt is writing from Yaddo at the age of 53. She has just had a retrospective put together with Walter Hopps (I would not known of either Yaddo or Hopps the first time I read the book). As Ken Johnson states below, her writing is indeed graceful and composed.

I can’t help but want to know more though. How does one, a divorced woman with three children steal away to the South West and then go make work in Yaddo? What drove her to start making work in the first place (Wikipedia, trusty Cliff Notes tells me she has a degree in psychology). What were her resources? How did she know David Smith? It is possible that was my route to Truitt as well. I see from Wiki that Clement Greenberg championed her, which makes me finally wish to read the Greenberg book.

So many questions. The truth is most artists are not writers and it is still rare to find a document like Truitt left behind of a daily record of her life. Of course, being one who too writes a journal (some years and decades much more than others), I can see the appeal.

I hope my questions are answered after reading the books.
I think I can appreciate minimalism much more now than I could have when I was first reading Daybook.

A writer of uncommonly graceful prose much admired for her published journals — “Daybook” (1982), “Turn” (1986) and “Prospect” (1996) — Ms. Truitt described her works in psychological terms. In the catalog essay, Ms. Hileman quotes a revealing passage. Recalling her junior year at Bryn Mawr, Ms. Truitt wrote, “I was obsessed with the idea of MYSELF as a citadel, an inner stronghold for which the experience of my life would on the one hand provide nourishment and other the other build more and more intactly.”

This may explain why works that depart from the stele are less powerful. An anthropomorphic, integrative container of the self, the monolith had a personal significance for Ms. Truitt unlike any other form. She added moldings or crosspieces to some works, but those elements only disrupt the unity of the stele without contributing anything very exciting formally or metaphorically. “Grant” (1974), the only large piece that lies horizontally on the floor, has nicely colored bands of mauve and ochre around it and an additional, short plank on its dorsal side for formal variety, but it has none of the imposing impact of the stand-up works.