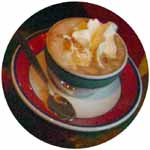 Entire volumes could be written about the prohibitive cost of keeping yourself fueled in various ways in Iceland. I have met only one American the whole time I have been here and it was our main topic of conversation- she just couldn’t get over how steep it all is. The American dollar has plummeted too since I last visited Europe, which has led the topic of money to sit squarely on my back shoulder at all times.
The few times I have gone out to eat- usually a bowl of soup with bread has been between $10-15.
Subsequently, I have been mainly cooking for myself, becoming a connoisseur of the local grocery stores here, and making half assed guesses at converting Fahrenheit to Celsius with no cookbook in site. Like going to tiny town, everything here seems smaller to me, from coffee cups to spaghetti sauce to vegetables, and unlike what I’m used to seeing there is usually a selection of: one.

These facts from Iceland Review reveal I am not imagining things:

I was told jokingly before I left to bring some Metamucil with me as the site of a vegetable might be quite rare. Almost half right. The grocery stores do have them, most of the vegetation seems to come up from Holland and Spain. My favorite has been the packaging of baby cauliflower and baby broccoli together. Things like green beans, if you can find them are packaged in little clumps, similar to how herbs are sold in American grocery stores in the winter. I have been making a lot of soups. The meat section is a bewilderment to behold and I have not been so adventuresome. A popular site, reminiscent of the 1970s are cans of carrots and green vegetables cut into cubes. 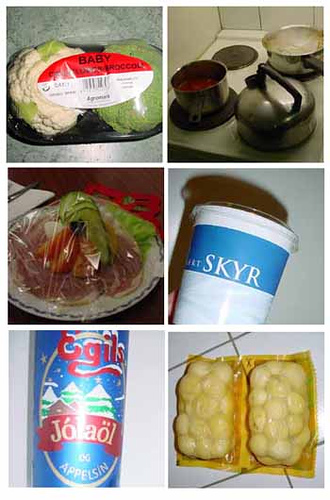 I have become quite fond of their Icelandic made Skyr, similar to yogurt but much thicker. There is actually a television commercial of an enthusiastic blonde with an American accent going into a shop and asking for Sky-er. The cashier is confused until she realizes the tourist wants “Skir”. Allegedly in 2006 Whole Foods Groceries (I know) in the States will be importing Skyr and Icelambic lamb to some of their stores, so I imagine there will be many more mispronunciations, this time uncorrected.

The coffee here on a consistent basis is quite good, and I was cheered last night to buy a crate of Clementines (Clementinen) at a cost similar to what I am used to. There are numerous products packages specially for Gleđleg Jól— from smoked salmon, pickled herring to a special Christmas drink that is a combination of non alcoholic malt and orange soda.

You would be sadly mistaken here if you attempted to alleviate sugar from your diet. There is incidentally a health food store here, very tiny that I visited last night out of pure curiosity. They had interesting things from Africa and many mysterious jars along with the standard organic this and that. As you can imagine, the cost of everything was too prohibitive to even entertain. I went home and enjoyed my Clementines.

By the way, the only way to purchase alcohol in any form except to going to a pub is to visit the state run liquor stores. There is a reason the duty free store at their main airport is crammed, as the sticker shock on alcohol is truly unbelievable (an area where they excel at Value Added Tax). Already the newspaper contains postings of when the liquor store (in Akureyri it’s the Vin Búđ) will be closed for the holidays- from noon on 12/24 and closed until the afternoon of 12/29. I’ve been told this is typical and a good reason I am stocking a bunker of food.