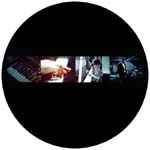 Christian Marclay is awesome! That is my one second intellectual review.

I thoroughly enjoyed the exhibit Seattle Art Museum has up right now hosting a mid-career survey of Marclay’s wide ranging out put, spanning his sculptures , video collages and found object pieces. I had seen Marclay’s work at the previous Whitney Biennial and thought his exaggerated musical instrument sculptures werehilarious (and those are all in the exhibit ) but it was also good to find the meat of his inspiration which consists of noise, thrift store records and basically rock aspiration as a fetish.

Marclay in his video collages displays an amazing obsessive compulsive eye for editing film snippets together to create a seamless work, the subject matter always sound. The highlight of the exhibit for myself was viewing the endlessly repeated screening of Video Quartet. It is a simultaneous projection of 4 DVDs that becomes one mesmerizing arrangement, containing a multitude of images playing off each other. It is beautiful, involving, and held my attention for the endurance. That endorsement comes from someone who typically hates walking into those cordoned off black rooms to view some unknown [God knows what] in the dark with strangers bumping into you blindly.

The beauty of any career survey is the ability to see how someone has gnawed on ideas over time, and examined them over and over again. Hopefully you become as engaged as they have. In this case I very much enjoyed the world that Marclay immerses himself in and was pleased with SAM for mounting the exhibit.

That being said I am always on the hunt for painting. I went up to the fourth floor of the museum to view a show gathered from the permanent collection titled: International Abstraction: Making Painting Real . While there was nothing here earth shattering, it was a nice for my brain to sit in a roomful of painting for a bit.

There is this strange little and uncharacteristic Agnes Martin on display titled “Winter Yellow” , a small postcard size bi-morphic work in ochre-brown-and orange. A note on the wall says the Canadian had actually studied in Bellingham, Washington for awhile before moving to New York and had destroyed most of her work from that era.

The exhibit ends in a room devoted to Minimalism, which as much as I have tried to change my mind over the years, still absolutely dislike most of it. The vein of painting generated by Ellsworth Kellyalways gets a vile reaction from me, which is stupid, because: who cares. I do for instance really appreciate Robert Ryman, and have warmed up to Martin’s later work, which was also in the room. For the most part though I made a quick exit.

The museum was nicely quiet yesterday afternoon with the exception of a beastly loud German couple persistently debating every piece and my personal favorite, taking calls from a booming cell phone. I am convinced these sorts of people are actually undercover guards hired by museums, this experience being so prevalent at every one I visit!