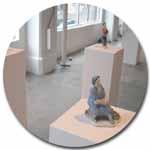 One of the regretful things I will be missing this month is the new exhibit of Hildur Bjarnadöttir up at Portland’s Pulliam Deffenbaugh. I just caught up with Jeff Jahn’s excellent coverageof her show over on the PORT site, and glad to see her work so thoroughly examined.

Ironically Bjarnadöttir was the first Portland artist I became aware of when I was still living on the East Coast. I say ironically as she is actually an Icelandic native, but while in Portland gathered some nice notice. She probably hit my radar before many others as at the time as I had taken a detour from conventional art and became interested in fiber. For a bit I pursued a short-lived, carpal tunnel riddled bout with knitting which at the very least allowed me know what hard work it can be. Nowhere does the intersection of fine arts and alleged craft become so beautifully merged as in Hildur’s work, if you look at her previous pursuits of tatting, embroidery and crochet. A lovely thing to know is she has taken the handwork of Iceland, which is so important to their culture and placed it firmly in the realm of serious art- all the while winking over her shoulder at the prospect.

“I work contrary to everything I learned during my upbringing…. I was taught to make useful and beautiful objects, but I wouldn’t and I don’t.” quote from Unraveled- Boise Art Museum

I was briefly introduced to Hildur last summer, as it was known I was about to venture to Iceland in a few months. She herself was in the midst of a handful of months traveling between Sweden, Iceland, Boise and Portland in what sounded at the time like a punishing travel schedule in order to prepare for exhibitions. She graciously sent me an email while I was riddled with the darkness of Iceland and she stuck in Portland’s torrential December rains- I’m sure each of us wishing to change geographical places.

Hildur’s show in Portland, Overlap ends this weekend, but you can still catch her work at the Boise Art Museum through March 12, 2006, in an exhibit called “Unraveled“.