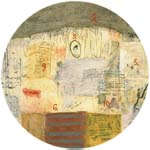 ‘”There are so many people who graduate with MFA’s, but after five years not many are left who are really working at art.“

Read California painter Squeak Carnwath’s answer and other thoughts in an interview with the now sadly defunct works + conversations.

I just reread the James Turrell interview in their issue #2 with renewed interest due to a revisit to his show and Skyspace [at the Henry last week].
It makes sense he used to be a Quaker.

“‘Turrell’s work is meant to be taken in slowly, quietly, and over time.”

I wonder how he would have felt upon entering his Skyspace last week, which is beautiful when you are solo, but claustrophobic if surrounded by a gregarious jabber jaw. A fellow museum visitor just couldn’t contain himself and burst into a loud monologue about doesn’t it sound different in here and wow, look at the light-what do you think and on and on and on.
So I will return to give it another chance hopefully on a less trafficked day.