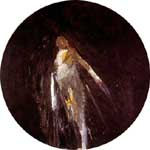 Still working on a back log here from the previous month before we get down to any business.

I astounded myself by making it to the Tacoma Art Museum during the very last week of the show. Nathan Oliveira at one time held a very big influence on me in my youth, and I had never seen a survey of any size featuring his work before. I hadn’t been to the new TAM either. A choice well made to say the least.

I am still held by the sway of Oliveira’s 1960’s solo figure/expressionistic efforts. Some of the paintings with their scraped and drawn surfaces felt very recent, like yesterday. I have always been a fan of his largely monochromatic use of color, his fat paint. Certain eras of Oliveira recalled Diebenkorn which is not surprising and neither is the fact that a lot of my viewing reactions were based in nostalgia. It is hard to escape your early influences. This incidentally is not so bad if they continue to reverberate. At times during my visit I felt like a chick imprinted on a grown duck, pecking after my past..

A mental note was made that the works in the later wing [of the chronological survey] felt empty. You can sense Oliveira’s boredom in his later works as he tries to navigate away from that singular subject he utilized for so long. They did not do much for me. Walking backwards though, into the first room, I can give my most honest critique. This may not be insightful but is a tried and true litmus test of what either a show does or does not do for me. I wanted to go home and paint.