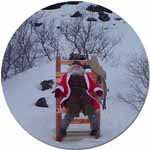 Ever since I have arrived here at the beginning of December, it quickly became apparent this is the most important time of the year for Icelandic people, and they anticipate and prepare for their celebrations in an enthusiastic and intense manner.

Probably the most atypical tradition you will find in their culture from everyone else that celebrates Christmas is they have 13 Santas! The 13 Santas, also known as the Christmas lads (Jólasveinar) start coming down from the mountains one by one each night starting on December 11th. This is an ingenious tradition, as the children set a pair of shoes out by the window each night hoping for a small present from the visiting Santa. If the child has been good, they get a nice present, but if not they will get a potato. It was pointed out to me that Icelandic children don’t have Christmas stockings, as they don’t have chimney’s (most of their buildings are heated geothermally) In previous generations I have learned the lads were much scarier and meaner and there was the added bonus of the Yule cat who might eat you if you were not wearing new clothes on Christmas (thus a tradition of at least getting new socks for the holiday). Older adults embellished how they shook under their sheets in fear of the Yule cat.
Now, to my own confusion I know the lads are out and about but the red and white suited Santa is also popular both as a concept, and seen in Christmas décor. One woman told me her five year old became very confused because they saw four red and white Santas in a car- why were they not in sleds?

The 13 Christmas lads each have distinctive names and are laden with mischievous personalities that become apparent if you catch them. I love their get ups too, they are much more tattered and plump in different ways than our now commercial airbrushed Santa. 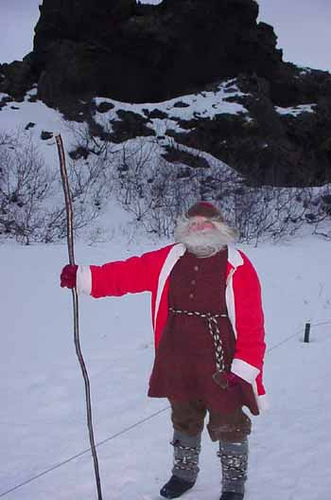 Typical of the twisted Icelandic humor, when I was out (in what I identified as a remote) lava field a week ago on a small guided day tour of the region, we were suddenly surprised by a tattered but friendly character sliding down a snow covered hill greeting us – it was Shorty, the third lad! I couldn’t stop laughing, as we had trekked a good ten minutes in, over ice to take a closer look at some lava formations. I was like, did he get radioed ahead that we were coming? There was no clear shelter for Shorty and soon apparent friend (who was kicked back on a formation, smoking and also laughing). It turns out it is the idea of the owner of the Hotel Mývatn in the area to bring people out to the area. Maybe on weekends (!) but on that day we were the only four people I had seen. Shorty put on a good show and gave us an apple. A truly insane idea and carried out to full effect even for adults. 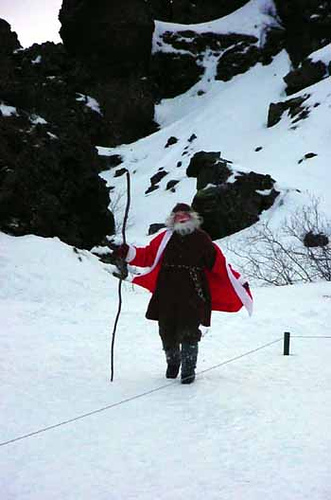 As a holiday crazy kid I was always looking for more ways to add festivities to our family life, including the not too successful co-opting of the Swedish Santa Lucia holiday. If I had known that Icelandic children had 13 Santas, I would have been so envious!

Another Icelandic Christmas tradition I am kind of obsessing over is their special holiday bread, called Laufabrauđ (leaf bread). Very thin sheets of dough are folded and cut into special patterns that are reminiscent of cutting snowflakes out of construction paper. There were even special cutting tools made for this tradition that is specific to northern Iceland but celebrated nationally, including the prevalence of prepackaged and pre-cut Laufabrauđ in the frozen foods section. 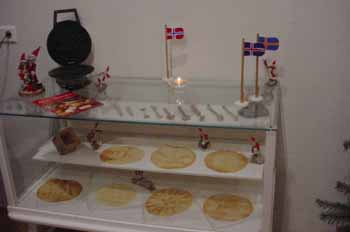 Allegedly, tomorrow, December 23rd is St. Þorlakur’s Day, named for Iceland’s major native Saint, Þorkakur Þorhallsson, former Bishop of Skálholt. I haven’t actually heard anything to confirm if this is still traditionally carried out, but if so it includes a family meal of skate, last minute shopping and the decorating of the Christmas tree.

I have been told that Icelandic woman go crazy cleaning and cooking the few days before Christmas, and tomorrow night almost all stores stay open on Christmas. Then, for 2 ½ days they just gather with their families and relax.

In one weeks time after that are the New Years Eve celebrations, where there are supposed to be so many fireworks clouding the sky that all you can see is red.
The newspaper, almost devoid of any political content from America has been running full page articles on Quentin Tarratino and his plans to be in Reykjavík with “unnamed celebrity friends” for the New Years holiday. I had no idea why he was getting so much daily coverage until I read on Iceland Review what the deal was. I have been very grateful for their English coverage of Icelandic news, as at this point I would truly be living in a bubble with out a little help from them in translation. 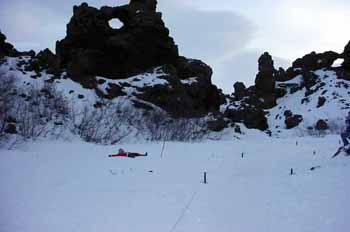