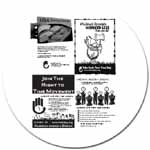 First of all, it’s a good thing I didn’t get any farther yesterday in posting- I was in such a foul mood that it was Monday. I know, why even bother at all. The irony is ( as one of my siblings pinted out in the comments section) yesterday – October 24 just happened to be Take Back Your Time Day.

This year’s TAKE BACK YOUR TIME DAY marks the 65th anniversary of the day in 1940 when the 40-hour workweek became the law of the land. Trouble is, 65 years later, with productivity quadruple what it was then, most Americans are working more than 40 hours a week. But if 40 hours was enough to support a family then, it certainly should be now.

Besides the fact that I was having time squeeze issues yesterday, this is a subject near and dear to my heart. For those of us attempting to carry on in the art making world, foolish enough to have not taken the academic route (or in reality- it having not taken us) and instead finding ourselves sitting in an office day after day for years on end, suffering from a lack of trust funds, student loan payments still plaguing us decade after decade and living in a society where you are expected to magically feel blessed when you actually get to take your lunch hour….this is something I think of frequently. A daily problem I have yet to find a happy solution to in my own life. I’ve indeed had people ask me why I don’t travel to cover more things on this site, like art fairs. The reality and glamour is this is a self-funded project being run off of a secretary’s salary.

A few months ago I spent some time digitizing my old slides. I was kind of caught off guard when it became apparent that my most productive years were the ones where I some how had finagled my way into a lessthan 40-hour week job situation. The glory years were my late 20s when I survived working a 20-hour a week job. Rent was a lot less then. A decade later the years that killed me the most occurred when I worked what they call 4-10s. That’s a 40-hour week in 4 days. The problem was I spent almost every day 5 of that week a despondent mess. The following few years after that- my last few in New York, I worked a job requiring much more than a 40 hour week- lots of overtime. This is when I found myself not making any art work at all. I swore on a stack of timesheets this would never happen again.

I shouldn’t be complaining. I usually try not to. Peter Schjeldahl is famous for telling artists to quit whining. I imagine we’ve all made our own beds on this one- no one wants to hear about it. In reality this year I have been very blessed. After not taking a vacation for three years I was allowed time off earlier this year to work in North Carolina and in a December I am being allowed to leave again for an artist residency- most employers wouldn’t be so generous. And those are the carrots that keep you plodding along. However some weeks, when you know the only way you can get everything done that you’d like to (and you never do) is to get up a 4:00am- you pretty much question your sanity. Choices like that which seem doable at the age of 20, pretty much leave you a rung out puddle by the time you are 4o. Unfortuntely as someone said to me recently- this is why we call them choices