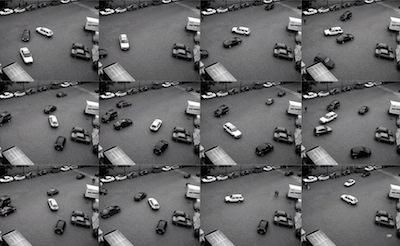 It’s Friday, finally the end of a very long stretch of employment work.
I don’t know why this is resonating today.

Carsten Höller used money from the exhibition budget to buy an old car, a Mercedes station wagon. He had the car covered with stickers that read “The Laboratory of Doubt” in different languages. With a loudspeaker fitted to its roof, he then drove through Antwerp expressing his doubts. The car became a vehicle for rumor; as an artwork it both spread rumour and expressions of doubt via the megaphone and functioned as a story that people passed on to each other.

From Ways of Curating by Hans Ulrich Obrist (discussing the Laboratorium exhibit, 1999).

In the clip referenced above is explained:

His first experiment with doubt was conducted in Antwerp, Belgium, where he drove around in a car with two loudspeakers on the roof, to spread the message of doubt. But only silence came from the speakers as Carsten Höller, in the middle of the rush hour, drove back and forth along the busiest streets – and stopped every couple of metres, unsure of where to go next.

So today we are doubtful and unsure but appreciating this story.