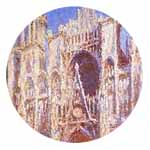 I’m so out of it, I nearly missed one of the biggest art stories to hit the Seattle Times in a long time. Last night, while picking up our take out dinner, the top of a stack of newspapers caught my eye as the the front page cover story touted: Paul Allen’s Experience Art Project.

The story goes on to announce that Paul Allen will finally reveal a portion of the art collection he has been keeping secret all of these years….to be shown at his EMP (Experience Music Project) in the upcoming April.

For those not from Seattle, the EMP is Paul Allen’s “museum of music” and in my opinion one of the most god-awful architectural blunders of modern day (Frank Gehry used a smashed guitar as the inspiration….) seen from street level, the building is like a garish piece of rubble. On principle too, I have never been to the museum as I find it offensive the place charges $20.00 a head, with never a free night or reduced admission evening in its fold. I have friends who have visited from out of town who went and loved it, but for the moment I stand my ground.

The Times reports the high admission might have had some impact on the recent belt-tightening at EMP, but here is the catcher:

Why EMP? (to showcase the art holdings that include DeKooning, Eric Fischl,Mark Rothko and many Impressionists…)

“We saw no better place to put it than a populist institution like EMP,” said the museum’s spokesman, Christian-Philippe Quilici. “We see it evolving into an all-inclusive cultural shrine.”

and then the final paragraph of the article:

Museum-studies professor Marjorie Schwarzer of John F. Kennedy University in Berkeley, Calif., sees Allen aligning himself with collectors such as William Randolph Hearst and Las Vegas developer Steve Wynn.
“It’s positioning art and culture as spectacle,” she said.
“It’s a model that more traditional, more serious museums avoid, this idea of emulating shopping malls and casinos. It goes with the idea of the experience economy, where instead of selling a service or a product, you are selling an experience,” Schwarzer said. “Like a little bit of Bellagio is coming to Seattle.”

While I agree with the sentiment in the article that “Anything that boosts arts awareness in Seattle is a good thing” , there seems something strange about all the secrecy surrounding the collection…yet of course I will be there in April , breaking out my $20.00+ as curiosity has again killed the cat.