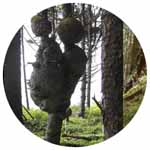 A year ago I found myself boggled by the lack of on-line representation of the art scene in Portland, which seemed strange since the place was literally exploding with activity**. I was mainly aware of Eva’s site (which some time would be fun to ask her what instigated her on line activity) and NW Drizzle and of course Jeff Jahn’s site. Now I am talking about sites that were on my radar, not that things didn’t exist.
Flash forward 12 months and there seems to be a veritable explosion of digests. I am just aware of Portland Public Art, a journal documenting the public art aspect of the PDX scene. Of course there isPORT, the mother ship of the Portland art vortex, and UltraPDX who I thoroughly enjoy….and god forbid many others everyday, which unfortunately I seem to have lost my touch in keeping up with.
There are also tons of artists in Portland who have their own websites. For a great index, check out Eva’s list of who she has previously had on Artstar Radio (scroll down a little).

Speaking of PDX artists, one I am fond of – both she and her work is Marne Lucas. She has a new show going up of photographs she took during her travels last summer called Amusement:

Amusement is a series of color photographs from Lucas’ road trips and travels. She often brings props and lets the environment around her dictate how they will be used. At other times Lucas captures nature on the sly, as when two fir trees bulging with burls are seen being intimate in ‘When The Forest Isn’t Looking’. Humorous self portraiture, an eye for the unusual and quirky use of animal figurines express a sense of discovery and playfulness she experiences while traveling.

Lucas is an artist using photography and installation art. She is a co-founder of the artist collective Blinglab, and a recent recipient of the 2006 Caldera Artist Residency.

and one last thing, another exhibit Marne has work in (a group show) –Trippin’ Balls: A Mycological Exploration has been extended due to popular demand! If you are anywhere near V-Gun gallery in Portland in the next couple of weeks, stop in and give it a look.

** My conclusion: undoubtedly they were all making art and not tinkering around on the web….