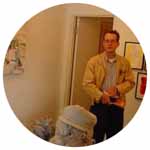 What can I say, the Affair at the Jupiter was once again a blast. We got a nice 24 hour immersion of all things art including going to some of the galleries around Portland and especially viewing Jeff Jahn’sFresh Trouble, which if you are still in the vicinity, I would highly recommend (it’s up for another weekend).

The Affair this year attracted more gallery participation from outlying areas and I was especially surprised by the amount of galleries from San Francisco. Perhaps the best part of the whole event was not one specific gallery or artist but the fact that the event was being held in an old school hotel, meaning each gallery was given the challenge of showing work in a postage stamp size space. This meant lots and lots of small works, especially drawings, which was a real treat to see. My personal favorite design challenge was to see how people dealt with the bathroom. The savviest spaces utilized the commode to their advantage, some even mounting artwork on the mirror. The worst were those who probably had no idea what they were getting into and used the tiny ship size room as an afterthought or even worse- unorganized storage area! The artist preview on Friday night was a hilarious event that most of the galleries ended up closing down their spaces for fear of keg cups being lodged on art.

Before hitting the Jupiter on Friday night we took a taxi over to Fresh Trouble, a huge sprawling but well utilized warehouse show. Where the Jupiter worked best emphasizing work on a small scale, the advantage of Fresh Trouble is its hugeness of scale and ability to house work of jumbo proportions. Walking through the door you grab a map and then amble on – the entire project (including thoughts of who got to install it) was impressive.

Saturday after giving the Jupiter our undivided attention saw us hitting some of the gallery spaces downtown. We were lucky in locating new space Gallery Homeland by the waterfront (620 SE 3rd Ave) and speaking to Co Director Paul Middendorf. I forgot to ask Middendorf about looking at the flatfiles they have gathered; being a flatfile fan and wishing more spaces utilized such an item (again, favoring more small work). Keep your eye on Homeland, it sounds like they have lots of exciting ideas in store.

Outside of Homeland, hitting the downtown galleries was anti-climatic after all the compressed energy of what was happing over at theJupiter. It was nice to see the large new immense space of PDX but I think most of the spaces put their effort elsewhere for the weekend.

Another exception though, as a bonus, we stopped by Froelick Gallery to see Robert Yoder’s new show which looks great. Also in the same area on Friday afternoon, after getting into town and being completely soaked in a rain storm we stopped by to say hi to Eva Lakeat Chambers Gallery. This was a beauty of a show with a rarity for the weekend- two painters. Always good to chat with Eva and it was wonderful to see the new space.

We started and ended our journey at Veganopolis. Good food, but better art at V-Gun gallery with the Bruce Conkle/Marne Lucascurated Trippin’ Balls: A Mycological Exploration with all its mushroomy goodness in full bloom.

After sitting out an insane hail storm and noting how schizophrenic the weather had been the entire visit, we hit the road again.

It appears there is no shortage of coverage of the Jupiter this year! That’s a good thing as after my own camera for documentation purposes pooped out (Yvette and I realized it was time to go home when both our camera batteries had bit it).

From what I hear, most art fairs don’t bring to mind a completely great time. I think other art fair organizers should look to the intimate scale and unpretentiousness that the Affair offers and take a note or two.