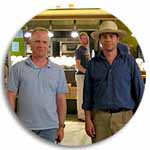 Check out the new and improved ARTDISH interface, with more new stuff coming down the pike.

Speaking of more…Sh!tstorm swings back into action Tuesday, October 18th for another round of (!) . The next version is the mysteriously named “Welcome to Hooterville“, once again at theRendezvous’s Jewel Box Theater.

Betty Bowen Award: Portland artist Marie Watt is this year’s winner of the $11,000 prize. According to the Seattle Times today:

In addition to the Bowen prize, two Seattle artists will receive special recognition awards of $1,500 each: ceramic artist Evan S. Blackwell and filmmaker David Russo. Blackwell works with found objects and has been an emerging artist in residence at the Pilchuck School. Russo has recently completed the 35mm film “I Am (Not) van Gogh.”

I would also recommend stopping by the Tashiro-Kaplan building tonight. Both Davidson Contemporary and Gallery4Culture are opening new spaces there tonight.
And don’t miss the second floor of the TK building for the Artpatchand SHIFT gallery openings (306 S. Washington) . SHIFT has new works by Joni Papp, who is a printmaker. Her new work is titledOrbit and features images culled from a process she has been working on for the past decade. Here is a photo of Joni (on the left) at a previous SHIFT opening: 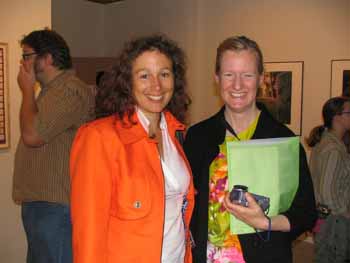 I stopped by the Henry yesterday and viewed their 150 Works of Art exhibit, which is a curious (but after a small amount of time of acclimating to the strange installation)- engaging way of exhibiting their permanent collection which like most museums does not see the light of day. Lots of good information written about this exhibit VroomJournal this week and coverage in the Weekly as well. I loved seeing the piece by the McCoy’s who were my next-door studio mates in the salad days of Brooklyn a decade ago. I still have early CD of theirs titled Small Appliances, which sadly I cannot play on my PC (it is MAC only). This project is from 1997, and it is funny to think that at that time their work seemed very exotic to someone just new to email. It really wasn’t that long ago.