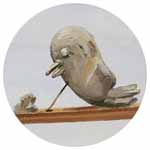 Weighing in on the new exhibit The Triumph of Painting, The Guardian recounts all things Saatchi in a week long spree of articles.

Waiting in the wings, Dana Schutz will be featured in Saatchi’s part two of Triumph. Wow, how does she do it, success right out of the starting gate? *

Angle Magazine, way back in 2003 stated.” At twenty-six, mere months after her graduation from Columbia’s MFA program, Schutz has her paint-stained running shoes poised on the fast track of budding international stardom. It couldn’t happen to a nicer painter.”

Pointing more to the recent future (2004), Index Magazine interviewed Schutz about growing up in the midwest and having the benefit of an art teacher mom. Still no assessment of how someone shoots cannon ball fast into fame, so soon after dipping their big toe into NYC.
*Still muddled? Here’s your answer, on Columbia’s own web site: could it be connections?

Schutz does mention the reason she arrived at limbless figures the previous year was from being “really tense.” Perhaps it was reading commentary left on Dennis Hollingsworth’s blog, accusing Schutz of stealing ideas (!).

You most certainly know some thing is up if Eric Doeringer is making bootlegs of your work. Doeringer was recently on the radio program Studio 360 explaining his bootleg project. As he says on his site,” So far I’ve only had a couple of artists demand that I stop selling my Bootleg versions of their work.” Doeringer, who sets up shop bookseller-like, outside of big gun galleries is hardly more of a threat (with his 8″ x10″ reproductions) to an artist’s career than the postcard reproduction you can buy at your local museum. Who pray tell is doing this demanding? 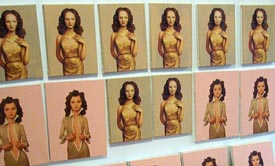