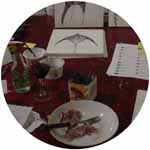 So the residency. It sounds lovely and everything, and it was for a bit, but I really got nailed by the lack of sunlight and sheer loneliness- it was a hard trip. The good news was I saw some beautiful sights and produced a lot of art, but it was one of the most psychologically alienating experiences I’ve ever had. I kept thinking of Bergman and rented Persona when I got home and was flat on my back last week with some malady.

So yes, the Icelandic folks were not as forthcoming as I had hoped. I was under the impression according to the residency materials I was there to get to know the towns people, yet after the first week everyone just kind of disappeared. I have been told this is typical because it was Christmas, but it was confusing.

I was prepared to give a lecture, have a small exhibit during my stay there, and this never materialized. There was a guest book in the studio from previous artists that showed most guests did indeed have an exhibit, talk and interaction yet when the days marched on and the office running the residency stayed closed I realized this was to never happen. No one ever swung by to see if everything was okay, or said good bye, and on my last morning as the taxi waited for me to go to the airport, I placed the Gueststudio key through the mail slot.

I never once during my month even shared a meal with anyone (Except for with the one American I met during my lava excursion). During the block of days that constitute the holiday (4 days) the entire town shut down with not even a restaurant staying open (luckily I found this out from the tourist office), so I was basically barricaded in the studio, alone watching my two channels of Icelandic television, drinking wine by myself. Boo hoo! On Christmas eve, when I realized that I would not be invited any where most likely, I broke open the special wine I had been saving in case of such invites, and drank it. And I know, such is life.

Don’t get me wrong, there were moments of good. Even though most everything was shut down for the winter I was able to take two excursions, one guided out into the lava beds and glorious nature, one to a whaling town, 30 miles south of the Arctic Circle. Strangely they were wonderfully lovely up there in this town of 2,500 and two separate blessed souls opened their museums for me, gave me personal tours- I was incredibly touched. Someone even said hi to me on the street, it was odd (most Icelanders, similar to New Yorkers look at their feet as you approach). It was a day that made me feel sane again.