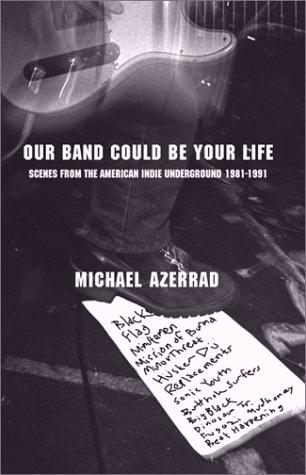 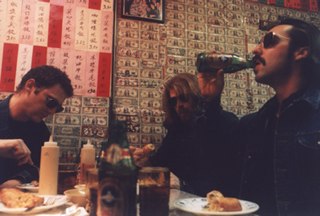 I Ate Acid With Caroline.

Back a long time ago, before the internet and before stuff like MP3’s, or before most people even knew what a floppy disc really was, people exchanged information via word of mouth and mailbox. Ten years ago I was introduced to the musician Daniel Johnston via this method and I have always wanted to see him perform. Last night, a mere decade later, I finally got a chance, witnessing not only a performance but an art show to boot. Now he has a web site and many people have paid homage to him and his art, but I got the feeling he was taking it all in stride.

My personal favorite was the album he made with Jad Fair, check this out for a quick listen.

Hey, sloughing around the house today? Maybe cleaning out your sock drawer or something? Fire up and tune into Vitamin J’s web show over at JunoBeach.com
-he’s promising a hectic set list plus a lot of imbibing about Iggy Pop who was just in Minneapolis on Wednesday. Yow!

Iggy was just in Minneapolis.

Jeff is in Minneapolis.
I was going to try to pass this off as Vit J’s home page, I mean this one, I mean this…uh one.

(edit- what do you mean “sound of one hand clapping?”)

“Oh thank God this is here now. Let this never go away.”

Does the world really need a new music magazine?

(edit- Does the world really need to read a gripe about a new music magazine- you see where this is going).

Boy oh boy does it ever!
I browsed up the “premiere” copy of Blender Magazine at work this week, just for kicks, and the sneaking suspicion I had about it was just confirmed when I looked at their web site and saw in the itty bitty tiny corner down at the bottom of the page the Dennis masthead signaling the world, danger, danger this is a product along the same lines as Maxim.

Uh, I know no one made me read it, and it was a little strange to see stuffed in between the likes of Janet Jackson and Destiny’s Child and Tim McGraw (a triple header!) a few interesting things, like the whole reason I picked up the magazine because there was an interview with Radiohead, but then I became extremely sad because I realized I have been in total denial that Radiohead is indeed corporate rock, but it doesn’t have to be that way does it? And then Thom Yorke’s plug, in said article, for the new Low album which of course completely blows another little fuse of melancholia in my brain because I kind of like having them quiet and all to myself.

But back to Maxim. I really don’t need to diverge on some stupid tangent about the special qualities of Maxim, Stuff, More Stuff, Stuff that Gets You More Stuff. But I do remember reading this article last fall that the New York Press ran concerning big gun Felix Dennis and his publishing empire which made me think, hmmm, they’re up to it again. Actually it’s a really funny article:

KB: The fact of the matter is, there seems to be the impression that Maxim is somehow lowbrow because it appeals to things that are basic and common in men. It’s the same argument that bands get when they become successful. Everybody says, “Oh, now they’ve sold out.”

DI: So you personally find nothing to read in it?

RS: No. It’s a horrible magazine. So I find its success…

RS: No, no. As I’ve said, I admire your owner… I think you guys have a tremendous base to work with. Eventually you’ll be able to sneak some good editorial in.

DI: I wouldn’t hold your breath for the editorial to change much. You may be under the impression that people are only buying it for the titillation and sort of accepting the editorial–

RS: Look, models are models… I particularly had trouble with [pieces like the one about] “I’ve always had trouble peeing in public. What can I do to get things flowing?” What’s new about that? That’s only been done for the last 30 years.

DI: When I was at Details we did a much longer piece, more sensational piece about that–

RS: Some guys are pee shy.

edit- I swear I have nothing to do with the XFL going under.

The Beauty Bar is one of those places that used to be a frequent haunt, but time has slid by and I hadn’t been there for awhile. 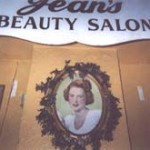 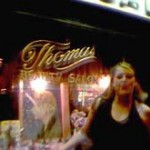 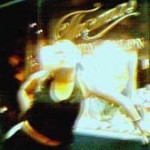 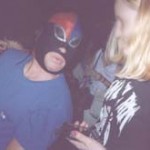 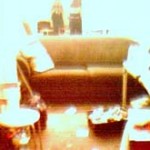 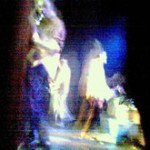 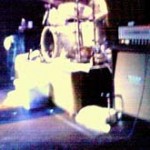 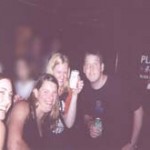 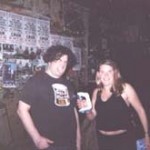 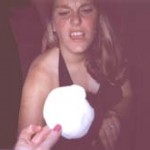 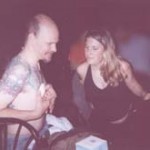 En route for Guided By Voices we stopped in for a few.

Also Bliss appears on the new Steve Fisk album (“999 Levels of Undo”,which I have yet to hunt out….weird.)

I went to my corner Pakistani run deli tonight on an emergency TP run, and found this. All displayed with a handmade “2 for 50 cents” sign. What the fuck you may say. 4 rolls purchased.

What a stinking week, and that is no pun intended.

I was glad today to see a few kind words of thought for Joey Ramone on a couple of my favorite sites, especially Dangerous Monkey and DAM, who voiced my sentiments exactly. There is something inherently sad about his passing, and it is hard not to feel your own gone-by-the wayside youth. I flashed back to my own memory of listening to my first Ramones album in 8-track form,and that was when they were selling them, brand new still in the wrapper.

“The format of all early Ramones are made for 8-track. No songs are cut in the middle for program changes, and since they’re so short in the first place, you can listen to the whole thing in a spare 31:05. Also available on this 8-track is “Carbonna Not Glue”, which was taken off the LP early on in the run due to its ‘controversial’ drug message. It is a great song. Some would argue that ‘Rocket to Russia’ or the ‘Ramones’ is better. No question all three would belong in the 8-track hall of fame. The Ramones sound great on even the cheapest portable 8-track player and the carts even now are not the hardest to find of 8-tracks, thanks to Sire Records’ (GRT Tapes) distribution. “

and then to ponder some other thoughts….

“Much like Steven’s scarves on his mic stand are to him, my chain mic stand became my trademark.”

“After months went by and after we had been told we were going to be signed and it still hadn’t happened, I began to hate A&R reps and I thought they just flew around teasing bands and building false hopes”

At first it was funny, but this scares me. But wait a minute….

If you stick it out to the end you get this:

“I was the only one from Rigor Mortis. Now I was feeling proud of myself! Maybe I do belong after all??”

The Village Voice’s Machine Age column this week discusses a site called “Disturbing Search Requests“. Truth.Fiction.Scary. How are people getting to your site?

If anyone is jonesing for the early days of Black Sabbath or garage Floyd:

“I’d like to introduce the members Tim Bagshaw on bass,Mark Greening on drums …and also myself, on the lead,electric guitar”

Tuesday night brought England’s Electric Wizard to New York, and to the uninitiated- they did not disappoint.

Playing to a strangely packed crowd at the scummy Continental (sidenote-oh my God- even they have a website!), EW found themselves in the early leg of their United States tour. Although you needed a weed wacker to get through the hard-core heavy metal heads, and there was an opening band which attracted a few too many members of Magic The Gathering (causing perhaps the band to drink too of sheer boredom before their 12 midnight slot)EW was a reminder of, how should I say- unpretentious,fucking great rock and roll. Hailing from Dorset,UK they are currently touring their way around the United States at breakneck speed, coming soon to your quarters.

Read an interview with these unassuming, nice blokes about their latest album “Dopethrone” from the rockzine Roadburn‘s site.